Personal Branding: Is Your Avatar Hurting Your Image?

I recently read that resumes are becoming less necessary as employers are becoming more interested in reviewing you as employee potential based on your online reputation.

As we all know we tend to make a decision on people within the first few seconds of meeting them. We then look for signals to reinforce our initial opinion.

I also recently wrote that your email address was important as "spunky1949" on hotmail dot com was just not going to help you get a job interview.

Bearing in mind what I have said above, if you look at the avatars chosen at random from players of Empire Avenue what emotional responses do they evoke?

I 'know' most of the people represented below and they all seem pretty good people. The point of the exercise is to decide based on the pictures below which one's appeal to you and which one's leave you less than impressed or even stone cold! 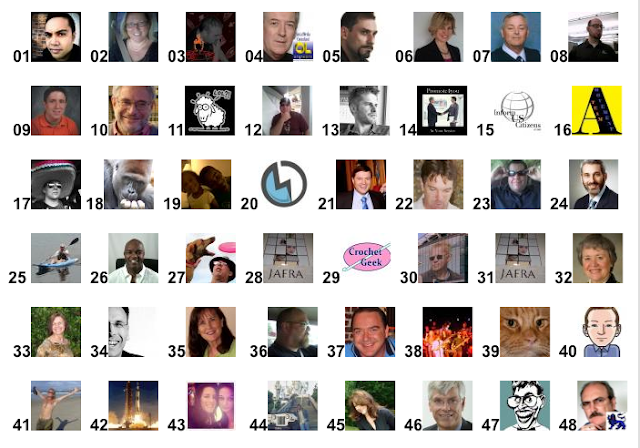 The exercise is about technique, cartoons versus real pictures, generic images versus personal portraits, logos versus pets, half naked long shots versus head and shoulders in suit and tie etc.

So if you could comment on one or two using such adjectives as "friendly", "trustworthy", "secretive", "arrogant", "nice", "obscure" or even "a bit dumb looking" it would help my research greatly.

Now this is an important topic for you and I as it effects how we present ourselves online. A company recently used Empire Avenue to research an avatar/logo for a product launch to see which of their proposals had the best impact. From my point of view they were smart to do that. As we are our own best product shouldn't we also think about and take seriously the issue's mentioned as they relate to our reputation and the impression we make online?

Posted by Richard Townsend at 23:46