The Trivia of Management

So why not have a little fun... just to see how many of us can easily recall all that learning we did when we were studying to become managers.... here's a few questions....

ANSWER ANY TWO in the comments section!!! Results/comments will be released/published on Sunday Evening the 1st of April 2012

What is Maslow's Hierarchy and what are the levels from top to bottom?

Are you a Theory X or Theory Y person and what does that mean?

What is the main reason for poor communication?

Can you motivate others and if so how... or if not why not?

What is the difference between leadership and management?

Can leaders be trained to lead or is it a natural instinct only that is found in some individuals?

Hope you enjoy the quick game of Trivia based around career issues!

Some information can be found at http://www.orglearn.org or you may just jump onto Google. Thanks for playing!
Posted by Richard Townsend at 16:51 33 comments:

'Management is different from leadership' John P. Kotter states. Leadership he says is concerned with "the development of vision and strategies, the alignment of relevant people behind those strategies and the empowerment of individuals to make the vision happen, despite obstacles. This stands in contrast with Management, which involves keeping the current system operating through planning, budgeting, organising, staffing, controlling, and problem solving. Leadership works through people and culture. It's soft and hot. Management works through hierarchy and systems. It's harder and cooler".
So there is a conflict for those who are expected to take dual roles!
'The fundamental purpose of management is to keep the current system functioning. The fundamental purpose of leadership is to produce useful change, especially non-incremental change'.
Strong leadership with no management however risks chaos... strong management with no leadership tends to entrench an organisation in deadly bureaucracy'.
The percentage of time managers need to spend leading is growing rapidly and Kotter goes on to say... "increasingly, those in managerial jobs can be usefully thought of as people who create agendas with both plans and budgets (the management part) and visions and strategies (the leadership part), as people who develop implementation networks both through hierarchy (management) and a complex web of aligned relationships (leadership) and who execute both through controls (management) and inspiration (leadership)".
A critical issue that Kotter observes is the issue of POWER (and dependence). He says that "because managerial work is increasingly a leadership task and because leaders operate through a complex web of dependent relationships, managerial work is increasingly becoming a game of informal dependence on others instead of just formal power over others".
A great danger for those that are ineffective leaders Kotter can come from all levels of the organisation:
'The wily employee near the bottom of the hierarchy... can make life difficult (or easier) for the "important" manager through any number of strategies'. "An increasing part of managerial work involves actively dealing with dependence on others who are above or below in the hierarchy, peers inside the organisation and even people outside". I don't think this is any revelation to those of us who have worked as managers for some time, however as he points out it is not often directly discussed.
One of the most difficult issues for managers I have trained in a number of industries (and countries) is how to deal with this dependence on others. This issue will be covered in the sections of LEADERSHIP and POWER. Some of the strategies that I have seen staff use are as obvious as 'hiding the files' (burning in one case) or 'badmouthing bosses' to customers, or as subtle as holding back an important communication for a critical few minutes or 'poisoning' the mind of another colleague regarding your motives and on whom you depend. Kotter goes on to say, 'a focus on the dependencies is superior to a traditional emphasis on only formal powers'.
Finally as I was advised at the first management school I attended and as I advise all participants at courses I conduct today, networking is critical (success versus effective) and the development of good working relationships with people in the network (bosses, peers, staff, other departments, customers, and any other stakeholders) is a major part of every managers role. As Kotter puts it, "Having focus beyond direct subordinates is obviously necessary". A fundamental point, "actively managing relations with the boss is a necessity for the good of the enterprise" and I suggest for your survival.
More management articles at orglearn
Posted by Richard Townsend at 22:18 2 comments:

A FEW GURUS THOUGHTS ON MANAGEMENT

Michael Hammer in his book "Agenda" talks about modern managers driven by an economy that is more than ever controlled by the customer. "Managers are rediscovering that business is about execution." He reminds us of the seriousness of watching the cash flow, fulfilling (rather than just getting) orders and the need to go beyond product ideas and focus more on product development. The role of managers is to help their company "devise products and services that satisfy customers and then create and deliver them in a profitable way that satisfies shareholders"; find ways for the company to "retain customers in the face of new competitors and respond to new needs without sacrificing its existing position"; develop ways for the 'company to distinguish itself from other companies with similar offerings and identical goals and maintain its success as times change'. "Devising the answers to these questions," he says, "is the eternal management agenda". 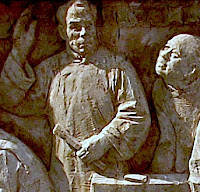 Peter F. Drucker in the "Essential Drucker" says, "Management is about human beings. Its task is to make people capable of joint performance, to make their strengths effective and their weaknesses irrelevant". He also says "the basic challenges of mangers is to find and identify those parts of their own tradition, history and culture that can be used as management building blocks'. Drucker explains that managers must constantly reaffirm the company's vision, mission, values, goals and objectives; "enable the enterprise and each of its members to grow and develop"; 'build on communication and individual responsibility'; "think through what they aim to accomplish and make sure that their associates know and understand that aim; think through what they owe to others and make sure that others understand; think through what they in turn need from others and make sure others know what is expected of them". Finally he advises "neither the quantity of output nor the bottom line is by itself an adequate measure of the performance of management". "Market standing, innovation, productivity, development of people, quality and financial results are all critical". Of course the single most important measurement exists on "the outside of the organisation" how well you create a 'satisfied the customer'.
If you see businesses as social institutions or organs of society (and Drucker does) he adds one more area of concern, which is "managing social impacts and social responsibilities". Here he is referring to such community issues as; being a good neighbour, paying taxes, responsible disposal of waste, minimisation of pollution and a "fundamental concern for the quality of life" including the "physical, human and social environment".
Stephen R. Covey offers us some great insights into life and the pursuit of excellence in his book, '7 Habits of Highly Effective People'.
Covey gives an appropriate view of what mangers need to think about in seeking to effectively [rather than efficiently] manage the resources and people under their charge. Covey uses 'Aesop's fable' of the goose and the golden egg. He describes how the farmer out of greed in an attempt to get all the golden eggs at once, kills the goose. He suggests that within this fable is a "natural law, a principle - the basic definition of effectiveness". "Most people see effectiveness from the golden egg paradigm: the more you produce, the more you do, the more effective you are". He rightly points out that the story shows that "true effectiveness is a function of two things: what is produced (the golden eggs) and the producing asset or capacity to produce (the goose)". Additionally he says, "effectiveness lies in the balance", what he calls "the P/PC Balance". "P stands for 'production' of desired results, the golden eggs. PC stands for 'production capability', the ability or asset that produces the golden eggs".
The important lesson is that we as managers are often so busy producing the desired levels of output that we can neglect the assets that enable us to produce. Covey defines three types of assets, "physical, financial and human". To be an effective manager it therefore follows that we must constantly seek ways to maintain our production equipment, ensure the optimum use of what are always limited cash resources and be committed to the well-being of our staff, colleagues and the people we report to.
A point to note is that Covey believes that, "our most important financial asset is our own capacity to earn. If we don't continually invest in improving our own PC, we severely limit our options". This brings us to the one of the fundamental requirements for all managers (or people), that is that we must see ourselves a continuous learners and seek ways to constantly improve our competence. The PC principle regarding staff is "to always treat your employees exactly as you want them to treat your best customers".
So to the question: Are their 'theories' more relevant than when they proposed them sometime back and which message is most important for now?.
Posted by Richard Townsend at 22:07 75 comments:

How to Stay Motivated

On many occasions I written that you can't motivate others. Here is a very good video on the topic of motivation! Only a few minutes however very good advice.

Want to inspire others? Want to stay motivated yourself the video's four tips will help.

If you are working in an uninspiring postion and you need an improved resume hop onto this resume sample and start building your resume and perhaps a more inspiring future.

Posted by Richard Townsend at 16:00 3 comments: