All You Can Be & Greatness

A new twist on "being all you can be" and greatness! 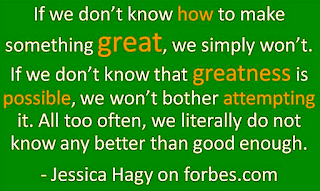 Thanks to Meetu Singhal

A couple of more thoughts on greatness.

All greatness of character is dependent on individuality. The man who has no other existence than that which he partakes in common with all around him, will never have any other than an existence of mediocrity. - James F. Cooper

The greatest people I have encountered are those with a strong vision of the future who possess the self belief, tenacity and strength of character to carry out their personal mission. In some respects they have also been both the most uplifting elements and dangerous individuals in the lives of those around them. - Ric Townsend

Posted by Richard Townsend at 21:17 4 comments:

If you have a large following it is impossible to talk to everyone however if you have a core inner circle at least talk to them. When you do communicate make sure you use their name and thank them for anything they do for you!  Secondly write to your audience on the topics they are interested in and stick to your core message. I saw a leadership writer tweet "if you don't like what I tweet now, use the un-follow button". He was upset because of criticism he received when overnight he started to put lots of unrelated trivia in his preciously serious twitter stream.

Number 4. Stay away from the "Fluff"

"Empire Avenue" describes itself as a social media rocket fuel and maybe it is. Players ask you to do missions for a reward and often you uncover some great information you can pass on, Often as not however you get to see volumes of fluff… volume for volumes sake!` There is nothing less dissatisfying than going to someones facebook page and seeing lots of photos that you've seen on the last five pages you've visited… the cute cats, loveable dogs, their pretty kids and amazing landscapes… over and over again. It's the old substance trumps form every time. I understand a few human touches are good and the occasional 'personal' stuff doesn't hurt however, not all of the time, you'll end up with a page that is like fairy floss. Very little sugar with lots of volume... not very satisfying,

If you want to build a reputation on the web you need to keep at it and do at least a little each day or your followers will lose interest. As I said before stick to your core purpose and if you can't come up with new and interesting stuff of your own at least curate good information from others that is pertinent to your topic or topics. As the video says… be consistent!


Number 2. When asking for help from your followers give them something worthwhile  supporting

Again using Empire Avenue as an example you get people asking you to share their information around your networks. Well sharing has two purposes, one the specific message you want to get out and secondly to build your reputation (or brand) generally. Asking someone to tell their network to say happy birthday to your grandmother isn't going to make it. Trying to get others to retweet about your upcoming seminar on how to breed Llamas isn't going to wash with a diverse readership. So if you want someone to share stuff about you make the information your distribute something of interest to a broad audience.

Number 1. Forget "you" in your social media communications

Some social media gurus or divas even refer to themselves as gurus and divas, gimme a break. I heard on the radio today how social media is feeding the natural narcissistic tendencies that a lot of people have today. Me, Me, Me… no its about them, them, them so its not "me and you", its "you and I" or better still "us". I know one notable player again on Empire Avenue who gained some notoriety by answering technical questions (web stuff) who posted a video on you tube scolding his audience for asking dumb questions. He then made it worse by posting videos of himself shopping, eating driving etc… and then complained that some people didn't want to do his missions… he had become his own topic and his narcissistic rants were just plain boring.

Posted by Richard Townsend at 18:02 6 comments: 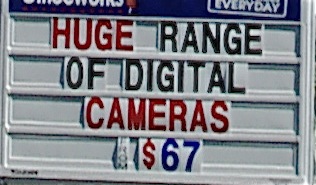 1. Many companies treat their social media accounts as if they were billboards and they are not… you must engage… or don't get involved at all.

2. Often individuals treat their social media accounts as a chance to be outrageous… its a bad policy and will bite you in the ass down the track so resist the temptation to do it!

3. It seems to be common practice for organisations to just use their company name rather than that of a person… not good, pick a name… make it fictitious if you must however people like to deal with people so give an individuals name.

This is basic even when I worked for a finance company 30 years ago we had a "Mister Brown" campaign… XYZ Co… just won't cut it in the social media space. We were all Mr Brown if someone called us and asked for him or we said MR Brown is with another customer, hi I'm Ric and I can help you! It's not rocket science!

4. Fix your avatar and make it consistent across all platforms… get rid of the cartoons, cats, pics of your kids and pics of your favourite toy!

5. Don't just broadcast, you need to invest the time and money to interact… hire me to do it for you or dedicate staff number who is competent and be prepared to take the good with the bad.

Bonus Number 7. Lighten up a bit.. I know you are fighting a terrible disease or uncovering and outrageous injustice however if you want others to share your stuff on their networks (to get attention for your Facebook page or whatever) you have to give them something that "their network" will be interested in.

More from Ric at orglearn.org